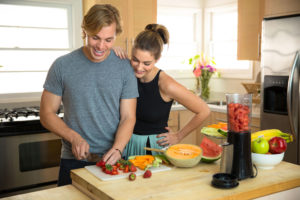 “Magnesium is a critical co-factor in more than 300 enzymatic reactions in the human body, and many are tied to energy production.”  Taken from Tuesday Minute, Joe Buishas, LDN, CCN

Magnesium is a critical co-factor in more than 300 enzymatic reactions in the human body. Many of them are tied to energy production. Deficiencies in magnesium ultimately yield lower energy states, which means cells can’t maintain homeostasis, which means they are more susceptible to environmental toxins and infections, which causes free radicals to increase.

Free radicals “inside the cells” damage DNA and mitochondria which further reduce energy production and healthy cell replication. The average American diet creates a relative acidic chemistry. Excess acids can also cause free radicals. Magnesium helps buffer excess acid as it is a key alkalizing mineral. Also, if we are deficient in magnesium, this lowered energy state can cause the nervous system to be compromised which means muscles can’t fire properly and spasms can occur anywhere but especially in the heart and vascular tissue. Magnesium acts as an antioxidant inside the cell and protects DNA and intracellular proteins. Although magnesium is a direct chelator for the heavy metal lead, it indirectly protects us from mercury, aluminum and many other toxins like fluoride.

Another one of magnesiums’ principle jobs is to control glutamate receptors in the heart called NMDA receptors. When magnesium in the heart is low, the receptors become oversensitive. As a result, a minor stress becomes a major event. Animal studies have shown that as a magnesium deficiency gets worse, the release of pro-inflammatory cytokines such as interlukin-6 and tumor necrosis factor -alpha increase. Over 95% of magnesium is in the cell, so lowered magnesium levels translate into increased levels of inflammation in the cell.

Three major factors are pushing magnesium levels toward deficiency: Reduced dietary levels, one study by the National Institute of Health showed 68% of the American population was depleted in magnesium, while other experts put the number closer to 80%.

Then comes the next factor, the ratio of calcium to magnesium. One way to reduce a mineral is to increase another mineral that competes with it. For example, if we want reduce copper, we use zinc. The National Institute of Health now recommends that the optimum calcium intake be further increased to 1500 mg/day to prevent osteoporosis.

This recommendation disregards the already substandard American magnesium intake, which is less than 300 mg/day. That would bring the Ca/Mg ratio to 5/1 – which is above the 4/1 ratio of Finland. Finland has the highest ischemic heart disease death rate for young to middle-aged men. Speaking of osteoporosis, bone loss is accelerated in the face of magnesium deficiency. The presence of magnesium spares calcium from osteoclastic activity. So, excess calcium in magnesium deficient patients, will further exacerbate the deficiency.

The third factor is the amount of stress that we experience. Dr. Mildred Seelig, formerly one of the world’s authorities on magnesium, stated that stress, both physical and emotional, evokes release of the stress hormones catecholamines and corticosteroids. Stress hormones mediate the release and utilization of substrates for greater energy production and for improved skeletal and cardiac muscle performance. However, their excesses cause magnesium loss and inactivation and can be implicated in cardiovascular disorders.

True prevention is really about making the cell as healthy as possible which will allow it to utilize its own defense mechanisms. So although we need magnesium, we want to make sure we have a balance of the other nutrients necessary for energy production. That’s why we always recommend a multivitamin/mineral and a mixture of EFAs.

Feel free to stop in or call with questions on supplenting with magnesium. We do have magnesium and calcium together in a supplement and several multi vitamins if you are in need of them.